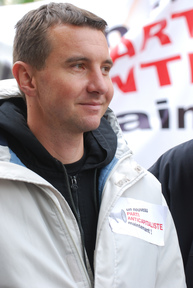 In this weekend’s International Herald Tribune Steven Erlanger writes about Olivier Besancenot, in Erlanger’s words “the extremely adept leader of the hard French left.” He adds: “Besancenot is, by occupation, a letter carrier, a member of the working class who delivers the mail for the state in the wealthy Paris suburb of Neuilly-sur-Seine, working part time. But he is also the leader of the Communist Revolutionary League, and he described himself without blushing as a revolutionary in a long interview here, in party offices above a printing factory in this racially mixed city just east of Paris, where cheap clothing stores abut shops selling North African and Middle Eastern spices and take-out food.
(...)
Besancenot speaks quickly and fluently, dotting his answers with references to the philosophical canon of Marxism and post-Marxism, but he has a sense of humor, too, especially about revolutionary purity. Asked about the way human fallibility has ruined previous utopias, he said that serious change must come from below, not from a dictatorship of the proletariat, and that he believes in the protective guarantees of legal rights, decentralization of authority, local responsibilities and multiparty democracy.” Perhaps Trotskyism will reinvent itself.