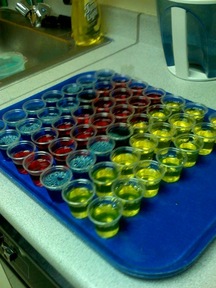 While having dinner with a friend in a fairly empty restaurant we followed the elections on her iPhone.
Around 10 o’clock she said: “Let’s go to a party in Brooklyn.” The crowd on Flatbush Avenue gave the impression that we witnessed a historic event.
The party itself was more subdued. We watched Obama’s acceptance speech in silence, now and then interrupted by friendly but ironic comments.
There was champagne and jello.
My friend was really happy but she didn’t expect big changes, probably not even small changes.
Over dinner I asked her: “Do you believe that in four years from now health care will be affordable and accessible to most if not all Americans?” She answered: “No.” Perhaps the happiest person I met was the taxi driver who drove us to Brooklyn. As soon as we were in Brooklyn he started honking as if there was no tomorrow.
His happiness was contagious.