Sleeping with the enemy 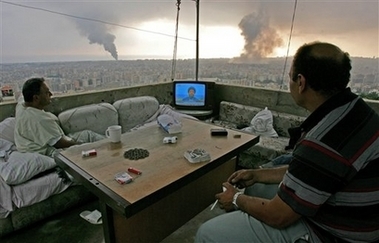 “Never sleep with a book reviewer,” said Samir El-Youssef.
The first time I heard his name was when I was asked to write an introduction to the Dutch edition of Gaza Blues.
After my trip to Lebanon (April 2007) I visited Samir in London where he has been living for more than twenty years.
And last night I finally interviewed Samir. He has a beautiful laugh, he can tell terrific jokes, especially about the Syrian secret service (Mukhabarat) and he is an interesting writer.
Samir explained why he was happy that his wife (who lives in Lebanon) could not read his books, which are written in English and not yet translated into Arabic.
“You don’t want to sleep with your critic,” he declared.
Soon one of my novels will be translated into Arabic. At least Samir’s wife will be able to read my novel. Of course this will prevent me from sleeping with her.