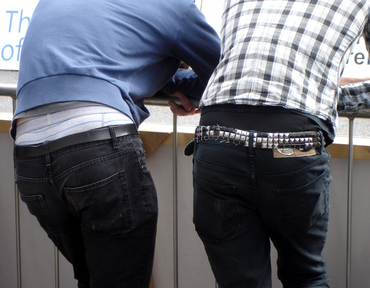 ‘The first order of business for the new president will no doubt be to get America to hitch up its pants and give the economy a kick-start. It will be interesting to see if he can also get America to hitch up its pants, period. This is a matter of no small concern to New York, where changes in fashion mean jobs, reputations and - count on it - money.
Just before Election Day, Obama appeared on MTV and took a question about laws in some municipalities that ban a popular street look among young men who go around in low-slung pants that expose way more underwear than many of us care to see. Those ordinances, the candidate said, are "a waste of time."
"Having said that," he added, "brothers should pull up their pants. You are walking by your mother, your grandmother, your underwear is showing. What's wrong with that? Come on,"’ writes Clyde Haberman in today’s IHT.

I would like to add: Sisters should pull up their pants as well. Not every thong is agreeable to the heart.