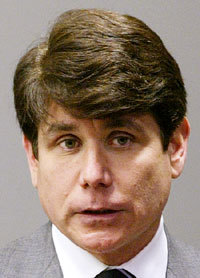 In today’s Times Monica Davey writes about Rod R. Blagojevich: ‘In 1996, John Fritchey, a Democrat who shared a campaign office with Mr. Blagojevich, was told that his stepfather had suffered a serious stroke. He walked over to Mr. Blagojevich, who was making fund-raising calls, and shared the news.
“He proceeded to tell me that he was sorry, and then, in the next breath, he asked me if I could talk to my family about contributing money to his campaign,” recalled Mr. Fritchey, now a state representative and a critic of the governor. “To do that, and in such a nonchalant manner, didn’t strike me as something a normal person would do.”’

Mr. Blagojevich obviously takes fund-raising seriously.
But the next time a governor gets arrested I would like to read a story about the governor’s love for his cat or his puppy dog.
And if we allow only “normal people” to enter politics we will run out of politicians soon.