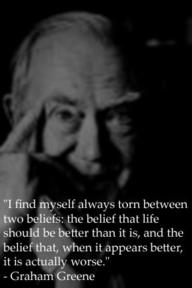 In yesterday’s Herald Tribune Pankaj Mishra reviews “Graham Greene: A life in letters”.
Graham Greene wrote in one of his letters: “The whole war is good for someone like me who has always suffered from an anxiety neurosis.” Greene refers here to the blitz on London, but anyhow I tend to agree with his self-diagnosis.
Pankaj Mishra adds: ‘Released from the white man’s burden, members of the British establishment were free to be adventurers and voyeurs. Greene found a post-imperial role for himself even before Britain lost its empire: a piece of luck just as good as the one that led him, through an expedient conversion to Catholicism, to the discovery of “sin” and the writing of novels that depend for their effect on the assumption — baffling, at least, to this heathen reader — that sex without religion, as Luis Buñuel once put it, is like cooking an egg without salt.’ These are memorable sentences, but perhaps Mishra is a bit too harsh on Greene.
If my recollection is right “The end of the affair” makes a convincing case for sex with God.
If the Supreme Being doesn’t allow us any carnal pleasure with Him, the least He can do is to be our Voyeur.
And sex without a voyeur might very well be compared to cooking an egg without salt.