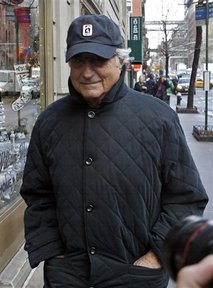 ‘Among some Orthodox Jews, one response to a member of the faith who egregiously violates their religion’s fundamental values and beliefs is to rend clothes and treat the transgressor as if he were dead — sitting shiva, or mourning, for him.
For the more secular there is a different response: convene a panel discussion.
Thursday night at the YIVO Institute for Jewish Research in Manhattan, it was Option 2: the Ivy League professors Simon Schama and Michael Walzer and the Wall Street powerbrokers Mort Zuckerman, Michael Steinhardt and William Ackman gathered to discuss “Madoff: A Jewish Reckoning.” Or, as the program asked, “Where did this man come from?” Seventeen-degree weather, airport-style security and a mandatory coat-check queue longer than the Rockettes chorus line did not deter an overflow crowd from attending an effort to shed light on Bernard L. Madoff, the man said to have bilked scores of Jewish friends and philanthropies out of billions of dollars.
Mr. Zuckerman, the chairman of Boston Properties, saw $30 million of his charitable contributions evaporate in a Madoff enterprise. He started off the evening by declaring that he objected to the discussion’s premise: that somehow Jews should have to account for “a sociopath,” writes Patricia Cohen in yesterday’s Times.

Shortly after reading this article I received an e-mail with an article written by a man named Eric Hazan who is described as a “well-known left-wing French Jewish writer.” Hazan writes: “The events in Gaza are the worst thing that has happened to the Jews since Auschwitz in two ways.”

I don’t believe that evoking Auschwitz in discussions about the Middle-East is very tasteful and I would say that more than enough people are discussing Gaza, so let’s stick to Madoff.