The Story of the Netherlands 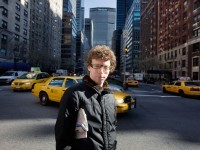 On 7th of October 2010, five Dutch professionals, living in New York, will talk with writer Arnon Grunberg about their life abroad and their experience with identity and nationality.

'The Story of the Netherlands' is a reaction to the NY400 celebrations in New York in 2009 and the recent political developments in the Netherlands. It will support the idea that identity and tradition are not limited to physical borders and that in these days we have to search for positive thoughts with collective power.

What are the topics and images that the we identify with and we are longing for? Answers to this questions will be searched for by Michiel Vos, journalist and HBO filmmaker with both, Dutch and American nationality; Pascale Gatzen, coordinator of the Fashion Area of Study in the 'Integrated Design' program at Parsons The New School for Design; Boris Kwantes, head of ABN AMRO operations in the United States; Heleen Mees, economist and columnist, writing for international magazines and NRC Handelsblad, and Christiaan Houtenbos, New York rebel star and top hairstylist since the 80's.
The show will be moderated by writer Arnon Grunberg, working and living in New York.