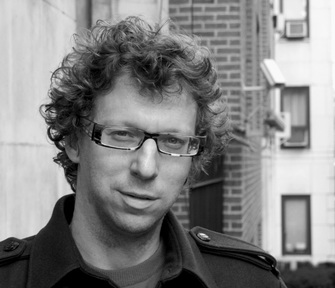 Margot Dijkgraaf writes about Arnon Grunberg's work in an overview of modern Dutch literature in the online magine Eurozine.

'Yet novels of the opposite calibre – nihilistic, postmodern, and replete with existential despair – are also extremely successful in the Netherlands. One of today's most talented writers is Arnon Grunberg (1971). Since his debut with Blauwe maandagen [Blue mondays] (1994), he has joined the ranks of the Netherlands' most admired and productive writers. He already has nine novels under his belt. No less impressive is the sheer volume of text penned by Grunberg that does not appear in book form: columns, polemics, articles, serials – he is equally at home in all genres, as he is on television, where he hosts cultural shows. Grunberg, clearly, is extremely prolific.

Grunberg has written tragicomic novels under his own name as well as under the pseudonym Marek van der Jagt. All are populated by losers – young, male immigrants, failed writers, or editors who have lost their jobs – who are desperately trying to give meaning to an empty life. Carried by short sentences, plenty of repetition, pseudo-philosophising, and an endless run of one-liners, his work is often associated with slapstick. His early work centres on the struggle between mothers and their sons. These are young, ambitious men, on course for a great future. In his earliest novels, those young men bore a striking resemblance to Grunberg himself. The first major shift in his work came with De geschiedenis van mijn kaalheid [The history of my baldness] (2000), his first novel written under a pseudonym. In it, the writer was an invention and Grunberg no longer a character. De asielzoeker [The asylum seeker] (2003) heralded the next change of direction in Grunberg's writing. For the first time, the hero is no longer a young man, but middle aged. The narrator has already experienced the failure still awaiting the earlier protagonists. He has already lost his ambitions, while a terminal illness presages the end of a disillusioned life.

Grunberg's most recent novel, Tirza, which has been awarded many prestigious prizes, focuses on an ageing man, a former editor of translated fiction at a publishing house. Since being laid off, he has been loitering around the airport, as if he was collecting or dropping someone off. This protagonist has a daughter, Tirza, who he has lived with since his wife left him many years before. He lives for his daughter and does everything within his power to be a model father. Ever since she was a little girl, he has wanted to teach her about all the important things in life. Having made sound investments, he is well-off. But he experiences his freedom as too undisciplined; in the end, lack of discipline only leads to catastrophe. Stability and stasis, to him, are preconditions for love and happiness. He can handle the fact that his wife exchanged him for a childhood sweetheart and that some of his wealth has vanished through fraud, as long as he can look after Tirza.

The book starts when his ex-wife returns, suddenly, on the eve of his daughter's graduation party. The tragedy that unfolds in the following weeks is first-rate, drawn with great confidence and precision. Gradually, the father's fear of losing his daughter becomes tangible: she plans to travel to Africa with her boyfriend (who is a dead ringer for a notorious terrorist). The decent, well-meaning protagonist inevitably gives way to a monster, the monster that lurks in all of us provided the right conditions are in place. It provides a clear illustration of Grunberg's nihilism, although he also tacks on a moralistic message at the end.'