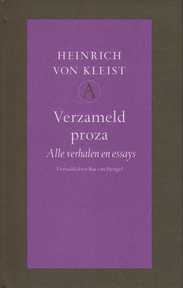 Atheneum-Polak & Van Gennep published a translation of Heinrich von Kleist's collected prose. The translation by Ria van Hengel was made possible with financial support of Arnon Grunberg.
Grunberg used the Golden Owl prize money that he won with his novel Tirza in 2007. Originally a book by Margulies about Guantánamo Bay was supposed to be published.
Grunberg is a strong supporter of literary translations / editions: Stendhal's The Charterhouse of Parma in 2004, Roland Topor's work in 2007, the collected works of Karel van het Reve in 2008. Next week Heine's collected poems will be published.