With Grunberg on holiday 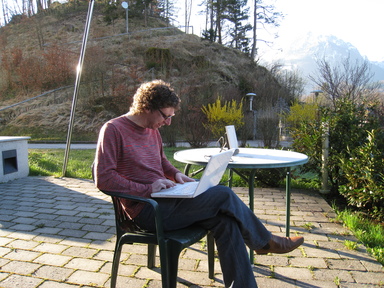 Arnon Grunberg (b.1971) began in 2006 with a series of reports for the Dutch newspaper NRC Handelsblad under the title ‘Grunberg among the people’. He has worked undercover as a chamberboy in a German hotel and as a masseur in Romania, but he also traveled to Lebanon, Iraq, Afghanistan, Guantánamo Bay, Paraguay and the Balkans.

Now the author is looking for families to take him with them on a holiday in the summer of 2010.
The idea was born when Grunberg was ‘embedded’ in a Dutch suburb in the spring of 2009. In this context ‘embedded’ means: to sleep over and temporarily join the family.
According to Grunberg, one can most effectively study the phenomenon of family life while on holiday: ‘A family on a holiday is a family in a war zone, or - to be more concise - in a state of war; that’s how I see it.’

Grunberg, of course, pays his own expenses.

To sign up, or if you have more questions or require more information, please send an e-mail to: metgrunbergopvakantie@gmail.com (‘With Grunberg on a holiday’)