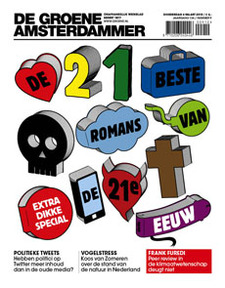 An enquiry among forty Dutch writers, critics, academics and publishers by De Groene Amsterdammer pointed out that Arnon Grunberg's novel Tirza is considered as the most important novel of the 21st century.
Among the top 10 are novels by Philip Roth, Ian McEwan and Michel Houellebecq.
Read more about it in the literature special that will be published today, the 4th of March 2010, on the occasion of the Dutch 'Week of Books'.
More praise for Grunberg: Saturday, the 6th of March 2010, is the ceremony of the Constantijn Huygens Prize. Click here for program info.