You Do Need a Little Luck... 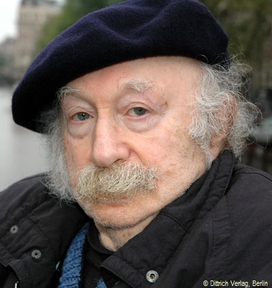 In 1964, Edgar Hilsenrath’s first novel, Night, was published by the Kindler Verlag in Germany. That things ever got that far is something of a miracle. The boss at Kindler, Herr Kindler himself, was afraid the novel might elicit inappropriate reactions from the German public, so he decided to write an afterword in which he explained that this was a “hard and unsentimental book”. That an afterword like that could preclude inappropriate reactions seems a singularly remarkable idea to me.
Still afraid that Night would elicit the wrong reactions from the German public, however, Kindler went on to insist that the author write a foreword in which he claimed that the novel was autobiographical. Later Hilsenrath would state that it was not an autobiographical novel at all, and the foreword was scrapped from subsequent editions.
Yet even then, the fear that this book would provoke inappropriate responses from the German public was not allayed. Kindler sent the book to a number of critics, asking them to tell the publishing house whether they believed that Night might "fuel anti-Semitic tendencies”.
Mr. B. Graubard of the Jewish community in Bavaria wrote back to say that “the Jews in this book elicit no pity, rather the complete opposite”. Moses Lustig, from a Jewish newspaper in Munich, felt that the book was “unreal”. According to him it did nothing to fuel anti-Semitic tendencies, but he was offended by the portrayal of sexuality in Night. Ernest Landau, head of publicity at Kindler, reported to his boss that “the Jewish press is unanimous in its rejection of Night”. Every writer hopes that his book will elicit reactions. But what are inappropriate reactions? Are they to be precluded? And if so, how?

Wherein lies the power of Night? First of all, in everything Hilsenrath has left out of it. A considerable portion of this 446-page novel deals with people in search of a place to sleep, in search of things they can trade for food, in search of a table on which to perform an abortion.
None of this becomes tedious, however, because Hilsenrath makes clear that there are no other activities to be performed, that all other activity means death. And also because Ranek’s fantasy and ingenuity seem endless. When all appears hopeless, Ranek nevertheless comes up with a way to find food or a place to sleep. Until he, too, wastes away with typhoid.
The people in Night have no history to speak of. In fact, they have no history at all. And no time for reflection either. They are, and they must survive, or not. There is not a single Nazi in the entire book, only prisoners.
Primo Levi once wrote: “The graffiti you see on occasion: ‘Factory = Lager’, ‘School = Lager’, that I find repugnant: it is simply not true. Nevertheless, and that is the secondary reaction, they can serve as a metaphor. In If this is a man, I myself wrote that the camp was a mirror of the situation outside, but then a distorted one. The fact, for example, that a hierarchy automatically and inevitably arises among victims is something to which not enough thought has been given; the fact that everywhere there are prisoners who advance over the backs of their fellow prisoners.” In Night, Hilsenrath does not show us the things human beings are capable of; we already know about that. He shows us the deftness with which the Nazis manipulated their prisoners, and how deftly those prisoners manipulated each other, and that even the half-dead can be manipulated. Hilsenrath shows us that the better you are at manipulation, the greater your chances of survival. Although you do need a bit of luck. Even the master-manipulator Ranek cannot outwit typhoid.
Edgar Hilsenrath not only continued to write in German, but he finally went back to live in Germany. “‘Ranek was afraid to stand up,’” Hilsenrath writes. “‘I remember that. He sat there very quietly, and only his hands moved at all. His hands stroked your hair, Debora. Again and again they stroked it. And then I said to myself: Debora is happy. And I was a bit surprised, you understand. But then I said to myself: happiness exists here with us, too. There is still the happiness of the benumbed who find a warm blanket. And the happiness of the hungry who find bread. And the happiness of the lonely who find love.’ “The old woman said nothing more then, although there were many things she would have liked to say, if only to kill time…”