Feelings Are to Discuss, Not Have 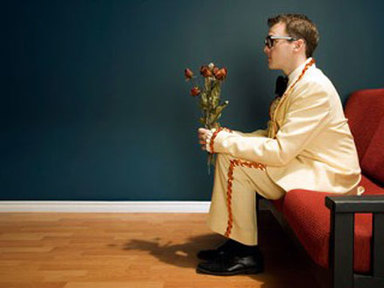 I moved to New York in January 1995. I was living in a one-bedroom apartment in Holliswood, Queens. Some people in Holland thought I was living in Hollywood. Most of the time, I didn't correct them.
After the first couple of days, I already understood that there wasn't much of a difference between Amsterdam and New York. A neighbor with a vacuuming phobia is a neighbor with a vacuuming phobia, whether you live in Osdorp, Amsterdam, or Hollywood, Queens. In those early days I could never find an answer to the frequently asked question, "What is typically American?" But several weeks later, I discovered what it was: Dating.
A student from Argentina, who has lived here since she was 11, told me: “The classic date means going to the movies and then having dinner. And you can always feel the suspense of the kiss."
"The kiss?"
"Yes," she said. "A first date always ends with a kiss. They've made an investment in you, so they want the kiss. It's the price you pay for dinner."
My first date in New York was with a divorced woman who lived in Brooklyn and was my English teacher. One afternoon, after class, I asked her out to dinner and a movie. She looked astonished and angry — as if I'd proposed to come by that evening with a matched pair of leather whips.
"I don't date," she said. "And besides, you're my student."
It took two whole months before we finally had our first date. We met in a cafe. All she wanted to eat was a plate of lettuce without dressing. She wouldn't hear of having wine, and when I told her I'd have no problem drinking a bottle by myself, she started shifting in her chair rather nervously.
"In France they consider one bottle of wine a day quite normal," I said, but even that didn't convince her. Before and after dinner she put those little Tic-Tac candies in her mouth. She also asked me a few times, "What do you feel?" I thought that was a more appropriate question for a doctor to ask while moving his hand over your abdomen.
"I don't know," I said. "I'm not somebody who knows what he feels, or thinks about it all the time."
"Do you do any sports?" she wanted to know.
"I play some chess every now and then."
"That isn't sports," she said. "Don't you do anything about your health?"
"No," I said. "Nothing at all. Let's be fair about this: whether or not you do anything about your health, you die in the end anyway." It would have been better not to use the word "die," because pretty soon after that she wanted to go home.
The phone rang at 10 the next morning. It was her. "How was the date?"
"Fine," I said heartily, eager to reassure her.
"And how do you feel now?" There it was again.
In Amsterdam, I once found a girlfriend by visiting her office every day at 4 and offering her cans of beer, bonbons and bad jokes.
Harry S. Truman said, "If you can't convince 'em, confuse 'em." That's what Americans need: More confusion.