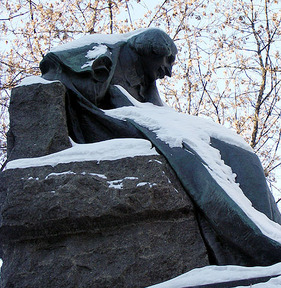 On a crowded, unpleasant flight from Dublin to New York, I finally read your long short story The Cloak, and many things will never be the same.
It was a long time ago that I felt such enthusiasm at the end of a book. A book? A booklet, that’s all you can really call it. The last time I read with such enthusiasm and didn’t want to stop must have been a few years ago, when I accidentally started in on a novel by J.M. Coetzee.
For the last few days I’ve been living with titular councilor Akaky Akakievich, a petty civil servant in St. Petersburg who, we’re told, is rather short, “somewhat red-haired, even with a somewhat nearsighted look, slightly bald in front, with wrinkles on both cheeks and a complexion that is known as hemorrhoidal.” This Akaki does nothing all day but copy documents. Out of pity, someone once gave him a task of seemingly greater importance, but that only made him nervous. You could call him a living photocopier. He seems to possess no true passions, never is he overpowered by an unsolicited but tempting desire.
But woe to those who carelessly brushes aside a man’s more paltry urges. The man with the hemorrhoidal complexion has one passion. You write: “There, in that copying, he saw some varied and pleasant world of his own. Delight showed in his face; certain letters were his favorites, and when he came to one of them, he was beside himself: he chuckled and winked and helped out with his lips, so that it seemed one could read on his face the very letter his pen traced.” During my morning shower I ask myself which letters might have been among Akaky Akakievich’s favorites. Could it have been the “k”? As a child I had a lot of trouble writing the “k”, and the letter’s obnoxious form is still fresh in my memory. That which is obnoxious at first can suddenly develop into something intriguing and warm.
On my way to French lessons or to the movies I murmur: “Certain letters were his favorites.” That is how simple yet mysterious the sentence is. Other people have a few favorite horses, those Don Juans among us who are unable to maintain the proper distance have a few favorite women, the members of book clubs have favorite books, but none of this can compare to favorite letters.
At work, Akaky is tormented by his colleagues. Perhaps because his complexion is hemorrhoidal, or because certain letters are his favorites and this love of his is not understood. The colleagues joke about him in his presence, they sprinkle scraps of paper over him, but that doesn’t distract him, he goes on copying the letters. Only when they touch him does Akaky say: “Let me be. Why do you offend me?” This sentence, too, follows me like a swarm of bees. “Let me be. Why do you offend me?” The fondest wish of any person deserving of the title “happy” must be that others will let him be. And the bafflement at the lack of that leaving-be reveals the only mystery worth pondering. Why aren’t we left to be? Why are we offended?
It’s not just the colleagues who torment Akaky, it’s also the cold. His coat is threadbare, the fabric at the back and shoulders is worn thin. And so Akaky goes to a tailor, because a person has no choice but to win out against the cold.
The tailor spreads the coat on the table, after making Akaky wait a long time, then holds it up to the light and shakes his head. A verdict is passed: the coat is beyond repair. “Touch it with a needle and it falls apart,” the tailor says.
And along with Akaky, that verdict makes me shiver. Shouldn’t one go one repairing coats, particularly when one prefers the company of certain favorite letters to that of creatures and persons who appear more animated?
After being thrown into a tizzy by this verdict, Akaky then sees that he has no other choice, he needs a new coat. He scrapes together enough money and has the tailor make something that can no longer be called a coat, but an overcoat. It even has a collar of cat fur. Marten would be too expensive.
Nikolai, there are those who say that truth does not exist. But if that were so, then literature would be an undertaking that deserves to be abandoned. And thanks to you, I know that the truth goes dressed in a collar of cat-fur.
The day the overcoat is finished is the happiest day in Akaky’s life. I will reveal no more than that.
I am going to read your long short story again and again. I will choose my favorite letters and live with them like a family, I will turn back the cold with the help of a tailor and be careful with cat fur.