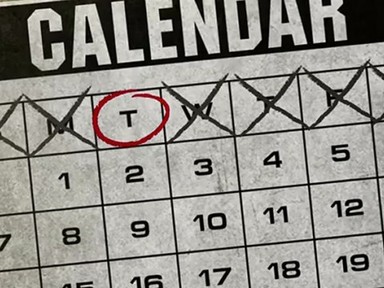 Everyone called him Tuesday: the regulars, the cook, his brothers, and even the suppliers. He was the waiter at Luna, the Italian restaurant on Mulberry Street, but he had tried everything to become a monk instead.
Tuesday’s parents had started the restaurant in the twenties and they had named it Luna because they had found a sign for a dollar that said Luna on it. Someone had ordered the sign but never picked it up.
It was a wednesday night and Tuesday was leaning over table eleven where a couple were taking their time with their lasagne. ‘I don’t mean to bother you,’ Tuesday said, ‘but we’ll be closing any minute now; I have to go home: my cat is hungry.’ Tuesday lived with his cat. He used to live with seven cats, but when the neighbours threatened to sue him, he got rid of six of them. Mostly because his brothers talked him into it.
Tuesday had five brothers and one sister, all of whom had become succesful in life. His brothers had all made it in business and his sister had her own beauty parlour. Tuesday’s brothers said, ‘If you get along with Tuesday, you’ve got a screw loose.’ When he was eighteen, Tuesday had gone to the monastery. His mother was from Manchester and his father from Naples; Tuesday said he had the best of both cities in him. According to some, his choice for the monastery had something to do with an unrequited love, but most people thought something had gone wrong long before that. His birth had taken an unusually long time.
After spending four years in the cloister, he got a phone call from his mother: ‘We need you here,’ she said. ‘Your brothers are in Vietnam and Europe, your sister is about to get married, and your father’s in the hospital. You need to help out in the restaurant; Luna needs you.’ Tuesday left the monastery that very day. ‘It’ll be for several months,’ he told the brothers at the monastery. ‘My mother needs me.’ It actually took a couple of years before his brothers returned from Vietnam and Europe – all but one of them. The official line was that his elder brother had gone missing during combat. Missing in action, it said. But everyone had given up all hope of him ever showing up again. Except for his mother, who put up pictures of her missing son in the kitchen. When she started addressing the customers as her son, the whole family got together and decided it would be better not to let the mother serve anymore.
For the third time, Tuesday leaned over the young couple’s table. They seemed to be having a fight. ‘My cat is hungry,’ Tuesday said calmly, ‘I really need to close now; I can have this wrapped up for you.’ He pointed at the leftover lasagne at their plates while a malicious grin spread over his face.
When the brothers had established that in fact their mother was more or less legally incompetent, they asked Tuesday if he would stay and work at the restaurant a little longer. ‘That monastery isn’t going anywhere,’ they said. So Tuesday called his brothers at the cloister to tell them his return had to be postponed a while longer. It was at that time that he started to collect cats.
His brothers treated Tuesday as if he had some disease. But when the neighbours threatened to sue Tuesday, his brothers paid for the best lawyer they could get.
‘The family must stick together,’ the now-eldest brother said.
‘Aren’t you an actor?’ the young man asked Tuesday. ‘You look so familiar.’ ‘No,’ Tuesday answered. ‘I’m a monk.’ He handed them a plastic bag with what was left of their lasagne.
In 1986, Tuesday’s younger brother had been accused of assaulting an under-age girl. The whole family got together and rounded up the money to hire the best lawyers available. They had all taken time off to be present at the trial. In their Sunday best, they sat in front of the public gallery, waving at their brother and giving him the thumbs-up. One hour before the verdict was to be read, Tuesday had gotten up and said: ‘Excuse me, I have to feed my cat.’ The next day, a picture of this scene had appeared in the newspaper. The caption read, ‘The tension of the trial becomes unbearable for one of the brothers.’ Tuesday had written a letter to the newspaper saying it was not the tension of the trial that had forced him to leave, but his cat was almost starving to death. Nobody had ever answered his letter.
Tuesday turned off the lights. Only the sign saying LUNA was still lit up.
His mother lived in a retirement home, but in her mind, there was no difference between the retirement home and the restaurant. So she kept preparing large quantities of pasta in her tiny kitchen, much to the dismay of the nursing staff.
When Tuesday got home that night, there was a message from one of his brothers on the answering machine. Halfway through the message, he turned the machine off. He took his cat onto his lap, and began to sing a hymn.