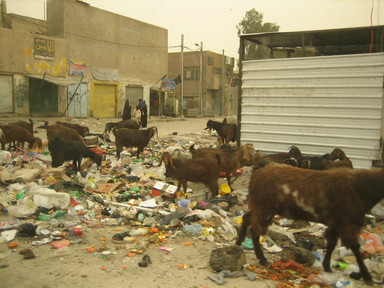 ‘It goes like this: Boy meets girl. They exchange glances and text messages, the limit of respectable courting here. Then boy asks girl’s father for her hand. Dad turns him down. Boy goes to girl’s house and plants a bomb out front.
The authorities call it a “love I.E.D.,” or improvised explosive device, and it is not just an isolated case. Capt. Nabil Abdul Hussein of the Iraqi national police said that six had exploded in the Dora neighborhood of Baghdad alone in the past year,’ writes Rod Nordland in today’s Times.
Mr. Nordland adds: ‘The police say that many of the men are former insurgents who are no longer trying to kill foreign troops but who have an array of bomb-making skills and a stash of TNT. Even without explosives, a popular type of explosive device can be made from common household items including gasoline, a soda can and a plastic water bottle, with the innards of a cellphone as a remote detonator.
“I’m a detective, and I don’t even know how to make one of these, but all these kids do,” the captain said. “There was a percentage of young men who were cooperating with the Al Qaeda organizations, or the Shia militias. They’ve changed their minds about fighting now, but they still have good experience in how to make I.E.D.’s.”’

Next time when you read about an I.E.D. and you think some insurgents are fighting infidels you may be wrong. Perhaps some young Iraqi men are just fighting heartache.