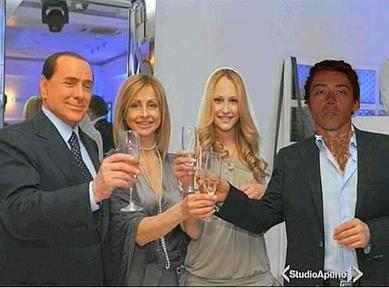 “As in all great affairs, Mark Sanford fell in love simultaneously with a woman and himself — with the dashing new version of himself he saw in her molten eyes.
In a weepy, gothic unraveling, the South Carolina governor gave a press conference illustrating how smitten he was, not only with his Argentine amante, but with his own tenderness, his own pathos and his own feminine side.
He got into trouble as a man and tried to get out as a woman,” writes Maureen Dowd in today’s IHT.

Berlusconi’s apparent infidelity seems to make him only more popular in Italy, but promiscuity can seriously hamper a politician’s career in the US.
It’s my modest proposal to turn infidelity into another contact sport.
So one senator can ask another senator: “Do you work out in the gym?” And the second senator will be able to answer: “For heaven’s sake, no! I have been promiscuous since I turned 13.”