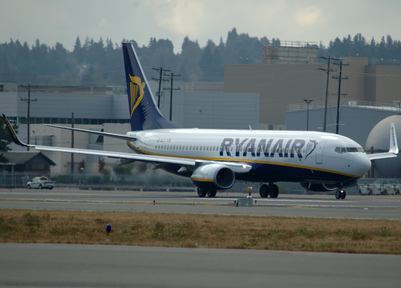 A very entertaining profile of Michael O’Leary, chef-executive of Ryanair, in Saturday’s Times.
Sarah Lyall writes: “Mr. O’Leary revels in his persona as national pugilist and provocateur, alternately charming and offending.
He once dressed as the pope to advertise Ryanair’s new route from Dublin to Rome. He has declared that fat people should pay more for their seats, but that it would take too long to weigh them at the airport. And, at a news conference to discuss the possibility of starting trans-Atlantic flights, he suggested — to the consternation of the young woman gamely translating his remarks into German — that business-class customers would receive oral sex.”

February 2007 I was traveling from Fort Lauderdale to Guantánamo Bay with Lynx Air. While I was checking in a Lynx Air employee said to me: “Could you step on the scales, please?” In Guántanamo a Canadian journalist wanted to leave a day earlier than was scheduled. She called the airline to see if there were any seats available on an earlier flight. An airline representative answered: “That depends on how much you weigh, ma’am.” Perhaps this is the future of air traveling. You buy a ticket and you pay per pound.