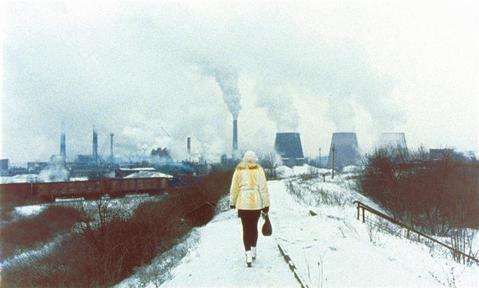 Last night I saw the movie “Import Export” – the most impressive movie I have seen in months. I admire “The Hurt Locker” and I urge everybody to see it but “Import Export” is probably a better movie.
The movie is about a nurse from Ukraine who travels to Austria to work as a cleaning lady. The hospital in Ukraine could pay her only thirty percent of her salary. After a brief stint for an internet-sex business she decides to leave her country.
And the movie is about an Austrian drifter and his father traveling to Ukraine to deliver jukeboxes and chewing gum machines to shady businessmen in godforsaken cities and villages.
Manohla Dargis compared “Import Export” to “Waiting for Godot” but I thought of Lars von Trier, though “Import Export” is a far more interesting movie than Lars von Trier’s “Dogville” -- for one because Ulrich Seidl, the Austrian director of “Import Export” appears to have an intimate knowledge of the reality of his characters.
Mr. Seidl doesn’t force morality upon us; he is more interested in survival techniques and the lack of those techniques.
I was very much reminded of my trip to Ukraine in December 2008.