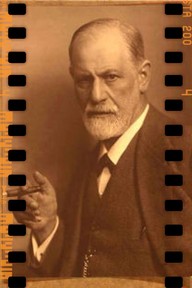 Tonight I had the strangest dream. Sigmund Freud was coming to New York to visit me. He was not only Sigmund Freud, he was also a distant cousin of mine and I’d promised to pick him up at the airport.
I was informed that Mr. Freud was constrained to a wheelchair and that he was probably wearing diapers for adults. He was flying straight from Ukraine to New York. I’m not sure what he was doing in Ukraine and I had no clue what he wanted to do in New York or whether he was going to stay in my apartment.
Nobody could tell me if he was flying to JFK or to Newark, so I was going back and forth between JFK and Newark in order to fulfill my duties.
Finally Mr. Freud arrived. (I’m not sure at which airport.) He was seated in a wheelchair and he was drooling.
When Mr. Freud saw me he made a few polite but slightly condescending remarks and he patted my shoulder.
Then he started a conversation with a beautiful woman who was standing behind me. I thought, this man is seated in a wheelchair, he is probably wearing diapers for adults, he is drooling but he is naughty as hell. My time with Mr. Freud in New York is going to be difficult.