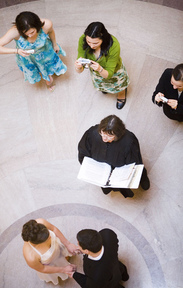 A friend alerted me to this interesting article in the Times: ‘Researchers have debated for years whether men or women are likelier to engage in “mate poaching.” Some surveys indicated that men had a stronger tendency to go after other people’s partners, but was that just because men were more likely to admit engaging in this behavior? Now there’s experimental evidence that single women are particularly drawn to other people’s partners, according to a report in the Journal of Experimental Social Psychology by two social psychologists, Melissa Burkley and Jessica Parker of Oklahoma State University.
(…)
But single women showed a distinct preference for mate poaching. When the man was described as unattached, 59 percent of the single women were interested in pursuing him. When that same man was described as being in a committed relationship, 90 percent were interested.’

Now I understand why my manicurist always told me: “Get married as soon as possible. You can always divorce. Even within two months.”