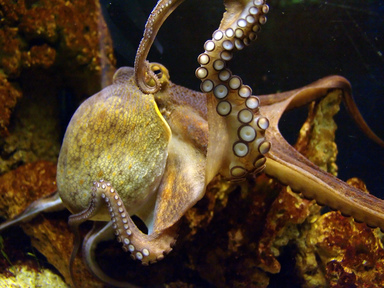 The biggest attraction of Bray, a town North of Dublin, is an aquarium.
My godson loves fish. He claims that certain fish are his best friends.
This afternoon we watched how an octopus was fed.
The aquarium attendant told us that the octopus is a very intelligent animal. For that reason the octopus got his food in a small container with a lid. The octopus had to remove the lid from the container, which he was able to do with remarkable grace.
The attendant said: “This way he doesn’t get bored.”

It’s a thin line between fighting boredom and torture.