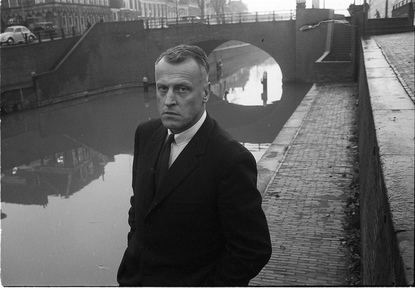 On the plane from Dublin to New York I had an awkward dream about the deceased Dutch novelist W.F. Hermans.
In this dream Mr. Hermans was not only a novelist but also a pianist. Unfortunately his career as a concert pianist was in ruins and he was forced to play at weddings and parties.
For some party I had hired Mr. Hermans to play the piano.
He arrived a few hours in advance in an apartment that did not resemble my own apartment at all.
Mr. Hermans asked: “Where is the piano?”

I answered: “In a venue nearby where the actual party will take place.”

Then Mr. Hermans started pacing up and down. He was impeccably dressed.
He appeared to be nervous, but I could not figure out what made him nervous. After all it was just a gig at a party.
There the dream ended.