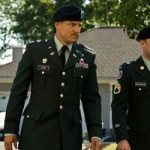 David Denby writes in The New Yorker: ‘“The Messenger” joins the group of strong Iraq-war movies that, like rejected suitors, stand hat in hand, waiting for an audience to notice their virtues. (My canon includes “In the Valley of Elah,” “The Hurt Locker,” and the commercially conceived but affecting “Stop-Loss.”) Box-office wisdom holds that it’s too early to make movies about this conflict, but how can it ever be too early to make a good movie?’

“The Messenger” is a good movie, though not as impressive as “In the Valley of Elah” or “The Hurt Locker”.

A.O. Scott is positive as well, but the last paragraph of his review might explain why I was a bit disappointed by “The Messenger”: 'No movie can convey the truth of war to those of us who have not lived through it, but “The Messenger,” precisely by acknowledging just how hard it is to live with that truth, manages to bring it at least partway home.'

I expect from art to convey the truth of things I have not lived through. “The Messenger” doesn’t exactly fail to do this, but there is something unsatisfying about the belief that those of us who haven’t seen combat will never be able to understand it.