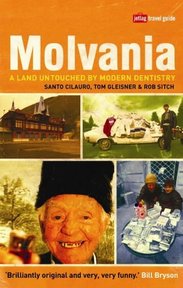 A friend finally gave me the much talked about travel guide to Molvania.
On page 26 of the guide the reader finds a chapter on the Molvanian language: “Molvanian is a difficult language to speak, let alone master. There are four genders: male, female, neutral and the collective noun for cheeses, which occupies a nominative sub-section of its very own. The language also contains numerous irregular verbs, archaic phrases, words of multiple meaning and several phonetic sounds linguists suspect could represent either a rare dialect or merely peasants clearing their throat.”

I love languages with lots of phonetic sounds and I don’t discriminate against peasants clearing their throat.