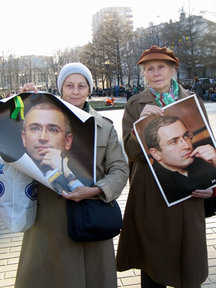 This afternoon I realized that I haven’t thought about Litvinenko in weeks.
One of the last interesting articles – at least as far as I know -- appeared last month in the NY Times: “Russia’s Prosecutor General’s Office on Wednesday produced a startling new twist in the investigation of the killing of Alexander V. Litvinenko, the former K.G.B. officer who died in London in November of radiation poisoning. It announced that it was investigating the possible involvement of former executives of Yukos Oil, the company dismantled by a prosecutorial assault last year.
In a statement released Wednesday evening, the prosecutor’s office said its investigation indicated a link between the poisoning of Mr. Litvinenko and criminal cases under way against Yukos executives. It singled out Leonid B. Nevzlin, a major shareholder and partner of the company’s jailed chief executive, Mikhail B. Khodorkovsky.”

I would love to visit Khodorkovsky in Siberia.