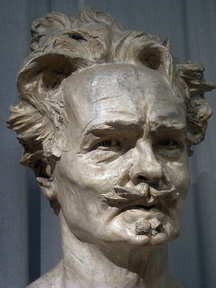 Tonight I saw “Creditors” by August Strindberg, directed by Alan Rickman.
Mell Gussow wrote in the Times: ‘When the wife (Caroline Lagerfelt) arrives, it is clear that she has her own agenda. She has used each man to her advantage. Strindberg who based the character on his wife, regarded her as a vampire; as he said, "in a phrase, woman as I see her." Ms. Lagerfelt stresses the character's strength of mind and her eagerness to use her sensuality to win a point. She believes she is in control, but as the play rushes to its conclusion, it is evident that no one is in control. To a great extent, "Creditors" foreshadows modern comedies of menace, as the characters are led to mutually destructive ends.’

Strindberg has been accused of misogyny, but I would say that he doesn’t hate women, he objects to pleasure. In Strindberg’s world the price for pleasure is destruction – an altogether reassuring principle.