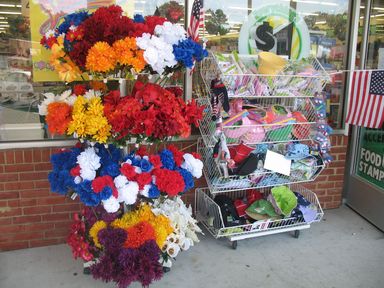 Gay Talese writes in this week’s New Yorker about an Italian restaurant called Gino on 61st and Lexington: “Gino’s most faithful customers, creatures of habit, feasted on consistency and the devoted attention of a single waiter, who (as one of nine waiters sharing the afternoon and evening shifts) oversaw each of his assigned tables for the duration of the meal. In the interest of controlling the overhead, Mr. Gino regarded busboys as an unnecessary expense, and he felt similarly about floral decorations. While the cost of the fresh flowers at La Grenouille is three thousand dollars a week, the plastic flowers at Gino’s—tucked into a half-dozen pearlescent plaster cornucopias that hang from the walls between the zebras—cost six hundred dollars a year.
The responsibility for purchasing these artificial flowers fell to one of the restaurant’s two current owners, a Neapolitan of sixty-nine named Michele Miele, who is also the chef. He buys the flowers at a Wal-Mart near his home in Sullivan County, and he washes them in the restaurant’s kitchen three times a year. Right now, the cornucopias are filled with spring flowers—plastic daisies, daffodils, tulips, lilies—and during the holidays he replaces them with chrysanthemums.”

When it comes to restaurants I’m definitely a creature of habit. And yes, why buy fresh flowers when there are decent plastic flowers around? The fact that Michele Miele washes these flowers three times a year made me almost cry. I would never do this. I would just dust them off a bit.