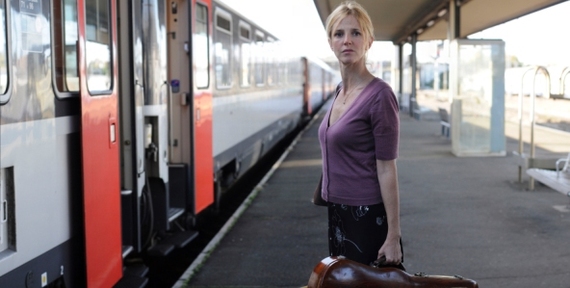 The movie “Mademoiselle Chambon” by Stéphane Brizé examines, according to Stephen Holden in the Times, “a possible love affair and its consequences.” A father falls in love with his son’s teacher, or perhaps it’s better to say, the high school teacher falls in love with him.
But the adultery itself is almost omitted.
“Mademoiselle Chambon” is not about lust, and the teacher, mademoiselle Chambon, played by Sandrine Kiberlain, is so fragile, her face covered with freckles, that one has the feeling that too much lust would kill her.
Near the end of the movie there is a beautiful scene at a train station. Mademoiselle Chambon is going back to Paris, she hasn’t boarded the train yet because her lover had told her he would join her. But the lover, Jean, realizes the consequences of his decision and instead of going to the platform he is waiting in the tunnel for the train and mademoiselle Chambon to leave.
After that he will return to his pregnant wife and his son.
Having an affair is the art of postponing decisions.