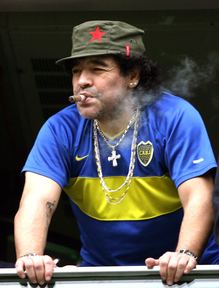 Rob Hughes is an excellent sportswriter.
In today’s Times he writes about Diego Maradona:

‘It was hard to avoid Maradona’s presence before, during and after plays. He arrived at the stadium 90 minutes before the match and swaggered up to Nigeria’s players, embracing them like brothers, kissing their cheeks, pinching their ears. Clearly he likes players, even opponents.’