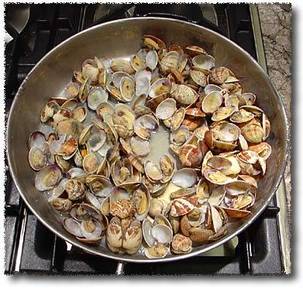 In today’s Times Sam Sifton reviews restaurant Il Matto: “Your drinks,” the waitress said, smiling brightly. Her tray had a martini on it — vodka, the brand unnamed — and a jar of pale, porous Ligurian beach stones, the size of mice. These were immersed in liquid. She used a forceps to pick one up and plop it into the drink, a scary moment for all involved. It imparted a faint mineral tang, along with a slick of vermouth.
Also on the tray was something resembling a round-toed Lucite slipper propped on a napkin and filled with reddish-brown fluid, ice and a few Manila clams, with a straw sticking out of it. The menu identified this as a cocktail, a Clamato Mary. It tasted of gin, vegetation and rust: a Long Island Sound iced tea.
Crème brûlée arrived soon after, a savory appetizer, the custard infused with pecorino beneath its sugary crust, served with red-onion jam and deeply reduced balsamic vinegar. The combination was weird, fantastic, a fun-house treat. A bowl of buffalo mozzarella came as well, melted into heavy cream to create a soup, served with tomato ice and fried eggplant. It ripped familiar flavors from their moorings. It conjured something new.
The eggplant returned again at the end of the meal, with white chocolate, for an extremist’s millefoglie. It reads horrid. It tasted divine."