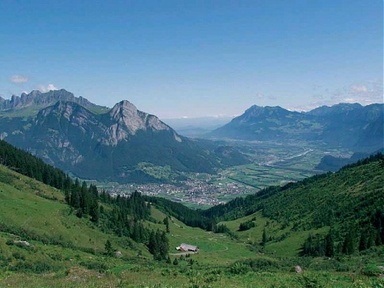 A fascinating article by John Tagliabue about the Rhaeto-Romanic language: ‘The people of this corner of Switzerland are arguing whether language is a matter of the heart or the pocketbook.
Depending on whom you talk to in the steep, alpine enclaves of Graubünden, otherwise known as Grisons, the easternmost wedge of the country, there is either strong support or bitter resistance to Romansh, the local language. “When people talk about the death of Romansh,” said Elisabeth Maranta, who for the last 18 years has run a Romansh bookshop, Il Palantin, which sells books in Romansh and in German, “then I say that there are days when I only sell books in Romansh.” Yet Ms. Maranta herself illustrates the fragility of Romansh. A native of Germany, she came to Chur 38 years ago with her husband, but does not speak Romansh herself, which is hardly a liability since virtually all Romansh speakers also speak German. While she is an ardent champion of Romansh, she can be bleak about its future. Asked why most of the books in Romansh she sells are poetry, she muses: “When a patient is dying, he writes only poetry.” Romansh is the direct descendant of the Latin that was spoken in these mountain valleys at the height of the Roman empire, and shares the same Latin roots as French, Italian or Spanish. So isolated were the people who spoke it in their deep valleys that not one, but five, dialects grew up, though the differences are not substantial.
In the 19th century, monks in the region developed a written language. The valleys produced their own writers in Romansh, mostly poets, yet it was not until 1973 that portions of the Bible were published in the language. In 1997, the first daily newspaper in Romansh, La Quotidiana, appeared.’

An interesting thought – a dying patient writes only poetry.