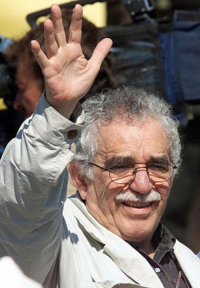 Julie Bosman and Simon Romero wrote today in the Times about the Nobel Prize for Vargas Llosa: ‘The previous Nobel laureate of the “boom generation,” Mr. García Márquez of Colombia, won after wide acclaim for his masterpiece, “One Hundred Years of Solitude.” In a twist worthy of one of Mr. Vargas Llosa’s subplots, Mr. García Márquez and Mr. Vargas Llosa, at one point close friends, had a violent falling out in 1976 in Mexico City, which they have yet to patch up.
The episode unfolded at a film premiere. When Mr. García Márquez approached Mr. Vargas Llosa to embrace him, the Peruvian writer instead punched him in the face, giving him a black eye, an image immortalized days later by the photographer Rodrigo Moya. Mystery shrouds what happened, but apparently the feud had to do with Mr. Vargas Llosa’s wife, whom Mr. García Márquez had consoled during a marital estrangement.
Confusion over the enigmatic feud persisted on Thursday, after news of a Twitter message attributed to Mr. García Márquez — which read, “Now we’re even” — made the rounds in literary circles across Latin America. Mr. García Márquez’s foundation in Colombia later tried to clear things up by saying the Twitter message was not authentic.
In any case, Álvaro Mutis, a Colombian writer who lives in Mexico City and is a friend of both men, told the EFE news agency that a reconciliation between the two heavyweights of Latin literature, after 34 years of rancor, was probably not going to happen.’

When it comes to their wives even great men can act childishly. A wife is not a toy animal. A real author should protect his ideas more fiercely than his spouse.

Mr. Vargas Llosa should have said: “You consoled my wife, I’ll console yours and since I’m at it I’ll console your daughters too. If they are nubile that is. I don’t want to break the law.”