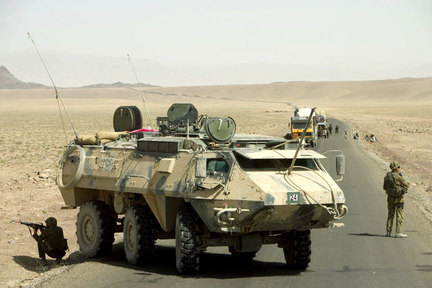 After a week or so being embedded with the Dutch Army in Afghanistan I reached a few conclusions (the sequence of the conclusions is coincidental):

-If you want to see Afghanistan or explore the beautiful nature of this country, being embedded with the army might not be your first choice. You'll hop from one military base to to the next, but anyway, Afghanistan itself is too dangerous.

-For those who think that the war in Afghanistan ended a few years ago: no, it hasn't really ended. Actually, large chunks of Afghanistan are still waiting to be liberated by the coalition forces. Even Kabul itself could not be entered by this blogger. (To be fair, I could enter Kabul at my own risk, but I was strongly advised against it.)

-Tension might be addictive, but there is nothing addictive about getting killed. A journalist embedded with the British army came in the line of fire while I was in Afghanistan, but the Dutch army is slightly more protective.

-The flipside is that I missed lots of the action. But at KAF (Kandahar Air Field), where I spent most of my time, I survived a rocket attack. The rocket landed three hundred meters away from me. (Excuse me, I still think in meters.)

-This was not the most pleasant moment in my life, but you go to a war zone to experience something like war, don’t you?

-If you want to get good, and I mean really good, at table football or ping-pong, the army is a safe bet.

-On a military base, yes, you do encounter some unpleasant macho-type hooligans, but in general, I met more sympathetic human beings at Kandahar Air Field than at an average literary festival.

-The food that Kellog, Brown and Root serves to our armed forces is better than I expected. Slightly better. (But avoid the French fries.)

-Rumor has it that the Romanian troops at KAF won’t stop eating in order to run to the bunker when there's an air-raid alarm. As a Romanian woman said to me, “They want to die happy.” As for me, I think they have a point.