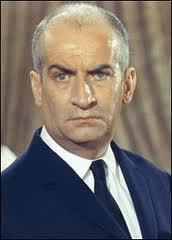 Steven Erlanger wrote in yesterday’s Herald Tribune an article about the relationship between Sarkozy and Merkel: “She makes fun, in private, of the way he walks and talks, of his rapid, jerky gestures and facial grimaces. He mocks her deliberation, her reluctance, her matronly caution. She has compared him to Mr. Bean and to the French comic Louis de Funès, with his curly hair and large nose. He sometimes calls her La Boche, the offensive French version of “Kraut,” and goes out of his way to give her an embrace and a double-cheeked kiss in the French fashion, the kind of contact that he knows very well, aides say, she cannot stand.”

As a child I loved Louis de Funès. He is completely forgotten outside France, but some of his movies might still be worth seeing.