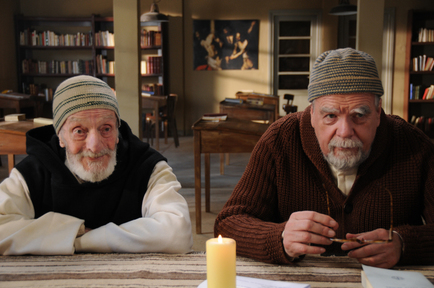 “Of Gods and Men” (Des hommes et des dieux) is a French movie by Xavier Beauvois.
I saw the movie on Wednesday night at BAM Rose Cinemas in Brooklyn.
The audience consisted of four people; two of my friends, a stranger and me.
One of my friends liked the movie but thought it was a bit slow, the other fell asleep.
I believe that “Of Gods and Men” is a masterpiece, it should have won an Oscar.
The movie takes place at a monastery in Algeria during the civil war. The (French) monks decide to stay, despite the fact that they are surrounded by violence.
"Of Gods and Men" convinced me that becoming a monk is not such a bad thing. Although I don't have plans to start my life as a monk in the near future.