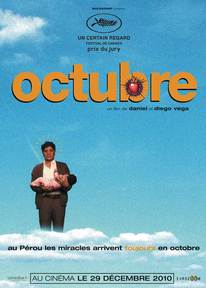 This afternoon I went to the MoMa to see the movie “Octubre” by Daniel and Diego Verga from Peru.
I was early, so first I drank a glass of wine and a small bottle of mineral water at The Modern, the restaurant at the MoMa.
Before the show a curator gave a short introduction and informed the audience that one of the directors was present to answer questions after the show.
I had a middle seat; next to me sat an elderly couple.
While the curator was speaking I felt the urge to take a leak.
Too late, I thought, after the show I’ll go the bathroom. I can’t disturb these old people.
But the need to pee got more urgent. Twenty minutes after the beginning of the movie I found myself in a crisis.
There were three options. Peeing in my pants. The beautiful thing about this option was that I didn’t have to disturb the elderly couple. And it was possible that at the end of the show my pants would be dry again. The downside of this option was the grave risk of smelling badly.
Option two: leaving, peeing and sneaking out of the MoMa as inconspicuously as possible. But one of the directors was present. I didn’t want him to think that I disliked the movie.
Option three was my best bet. Get up, disturb the elderly couple, leave the theater, take a leak, come back, disturb the elderly couple again and then watch the movie as if nothing had happened.
That is what I did. I stepped on at least three feet, but I managed to leave the theater and I reached the men’s room just in time. I took a leak in great haste. Probably for that reason I sprinkled drops of urine all over my pants.
Then I went back to the theater and I started concentrating on the movie. Out of sheer politeness I laughed even when I didn’t have to laugh.
I must say that the movie didn’t impress me. But I’m pretty sure that this isn’t Daniel and Diego Verga’s fault.