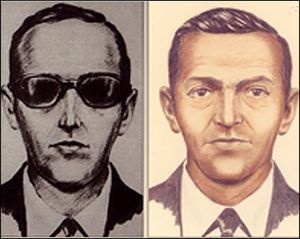 In today’s Times a beautiful story by Katharine Q. Seelye and Charlie Savage about an almost perfect crime I didn’t know anything about: ‘He smoked Raleigh cigarettes, wore a black clip-on tie and drank whiskey, and when zero hour came, he was one cool cat.
From Seat 18C on a Northwest Orient flight from Portland, Ore., to Seattle, he passed a note to the stewardess — this was 1971, pre-“flight attendant” era. She slipped it in her pocket, unread.
“Miss, you’d better look at that note,” the passenger calmly advised. “I have a bomb.” He opened his briefcase and showed her what could have been a bomb, nestled in a mass of wires.
With that, the man known as D. B. Cooper hijacked the plane, later parachuting out of it and into the unknown. His body was never found. Mr. Cooper became a folk hero, and the case remains the only unsolved hijacking in American history.
Now, 40 years later, comes what seems like a tantalizing new tip. The Federal Bureau of Investigation says it has a new suspect, one whose name has never surfaced in the ocean of tips that has washed in over four decades.’

Whoever he was, he must have been a gentleman.