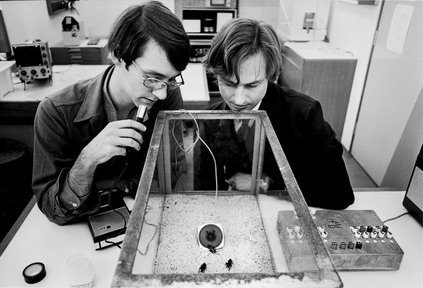 An excellent profile on professor Dawkins by Michael Powell in today’s Times: ‘Genes, he says, try to maximize their chance of survival. The successful ones crawl down through the generations. The losers, and their hosts, die off. A gene for helping the group could not persist if it endangered the survival of the individual.
Such insights were in the intellectual air by the mid-1960s. But Professor Dawkins grasped the power of metaphor — that selfish gene — and so made the idea come alive. Andrew Read, a professor of natural history at Penn State, recalls reading “The Selfish Gene” and feeling his world change.
“Gone in a stroke was the intellectually barren ‘it just is’ hypothesis,” he wrote in an essay. “ ‘The Selfish Gene’ crystallized it and made it impossible to ignore.” Not everyone bought the argument. The moral implications proved deeply troubling, suggesting that altruism disguised selfish, gene-driven behavior. “Many readers experienced the book as a psychic trauma,” wrote Dr. Randolph Nesse, a professor of psychiatry at the University of Michigan. “It turned their moral worlds upside down.” Prominent scientists and intellectuals cast Professor Dawkins as the herald angel of a selfish culture, accusing him and his fellow sociobiologists of setting the cultural stage for the “I got mine” age of Ronald Reagan and Margaret Thatcher. The evolutionary biologist Richard Lewontin, a man of the political left, painted a picture out of a George Orwell novel. “If biological determinism is a weapon in the struggle between classes,” he wrote with two other scientists, “then the universities are weapons factories, and their teaching and research faculties are the engineers, designers.” To Professor Dawkins, this badly distorted his science and his political leanings, which are resolutely liberal. (He opposed the Vietnam and Iraq wars, admires President Obama and votes most often with Labor. More recently, he voted for the Liberal Party in his district, as he admired the fact that the member of Parliament was insistently secular. The member lost in 2010, to an evangelical Conservative.) He was writing about the behavior of genes, not about psychological and emotional states.
Our glory as a species is that we can overcome our genetic impulses, he says, acknowledging that the book’s title “perhaps lent itself to misunderstanding.” “It’s not the selfish individual, and certainly not the selfish species,” he says. “My book could have just as easily been called ‘The Altruistic Individual.’ ” But true to himself, he does not stop at this concession. “What would our critics have had us do, falsify the algebra?” he asks, and says of the criticism, “It was irritatingly stupid, actually.”’

Many people would like to falsify the algebra. We would like science to confirm our worldview; we despise science when it doesn’t.