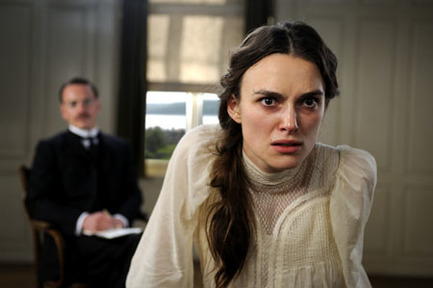 David Cronenberg’s movie “A Dangerous Method” is about the unraveling friendship between Jung and Freud.
It’s doubtful whether the movie does justice to Freud’s ideas, but then again a movie is not a college.
While leaving the movie theater I overheard a conversation between a man and a woman. The woman said: “I always knew that psychoanalysis was all about dreams.” And the man answered: “I’m not capable of remembering any of my dreams, that’s why therapy didn’t work for me.” A.O. Scott wrote in The Times: “It ["A Dangerous Method"] also at times has the quiet, uncanny mood of a horror movie, albeit one whose monsters are invisible, living inside the souls they menace.”

Uncanny or not, I would say that “A Dangerous Method” argues that too much civilization might be a blessing, but it’s a disease as well.

I sided with the character of Otto Gross who convinces Jung that he should sleep with his patient.

Of course, Christian culture brought us carnival, a period in which we are allowed – in a controlled manner – to stop controlling our urges, albeit for a short period of time.

The atheist should be allowed to overcome his civilization in a civilized manner as well.

Sex might be horrific, but Mr. Cronenberg knows his Freud: there is nothing as uncanny as civilization itself.