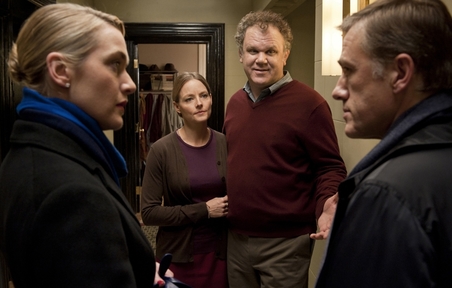 “Carnage” a movie by Roman Polanski based on a play by Yasmine Reza is about civilization.
The worst attacks against civilization, according to this movie, consist of abandoning a hamster, vomiting in the living room and using our cell phone in public.
I was highly entertained during the first hour, the vomiting is fantastic and I say this without irony, but at the end I dozed off. Probably because I didn’t have time to take a siesta today.

A.O. Scott was rather harsh: ‘I know these people. Why be coy? I am these people. And while these people might well be the parents of a Zachary and an Ethan, the sister of a Zachary would much more plausibly be a Sophie or an Emma than a Courtney. (Courtney? What is this, Beverly Hills? Reality television? Come on!) The elder Cowans and Longstreets would be on a first-name basis from the start so that the “call me Penelope,” “call me Alan” moment would never occur. (In France an invitation to replace the formal vous with the familiar tu might well be part of an encounter like this one, but this is not France.) And someone with Penelope Longstreet’s political views and multicultural concerns would be most unlikely to proclaim herself, without irony, a defender of “Western values.”’

Well, I’m not sure where exactly you can find a Courtney these days, as far as I know I never met a Courtney in my life (if your name is Courtney, please contact me; if you are pregnant and you plan to name your child Courtney please contact me as well) but Mr. Scott has a point, Mz. Reza’s play seems to be more theory than practice.

That doesn’t matter. What’s shocking about “Carnage” is not that aggression lurks behind middle class civilization, what’s shocking is that the worst attack against civilization is vomiting at the parents of the kid who was attacked by your kid.

Two important lessons we can learn from this movie:

Don’t befriend the parents of the friends or enemies of your son.

And don't get me wrong, I really liked this movie.