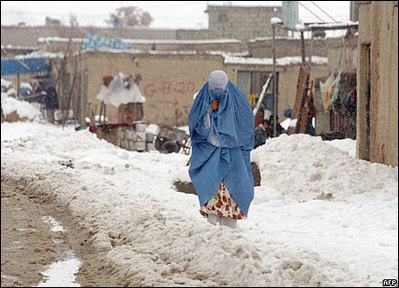 An unusual but powerful beginning of an article – Rod Nordland in today’s Times: ‘KABUL, Afghanistan — The following children froze to death in Kabul over the past three weeks after their families had fled war zones in Afghanistan for refugee camps here: ¶ Mirwais, son of Hayatullah Haideri. He was 1 ½ years old and had just started to learn how to walk, holding unsteadily to the poles of the family tent before flopping onto the frozen ridges of the muddy floor.
¶ Abdul Hadi, son of Abdul Ghani. He was not even a year old and was already trying to stand, although his father said that during those last few days he seemed more shaky than normal.
¶ Naghma and Nazia, the twin daughters of Musa Jan. They were only 3 months old and just starting to roll over.
¶ Ismail, the son of Juma Gul. “He was never warm in his entire life,” Mr. Gul said. “Not once.” It was a short life, 30 days long.
These children are among at least 22 who have died in the past month, a time of unseasonably fierce cold and snowstorms. The latest two victims died on Thursday.
The deaths, which government officials have sought to suppress or play down, have prompted some soul-searching among aid workers here.’

If children freeze to death within miles distance of NATO HQ in Afghanistan, more than ten years after the beginning of the war, then we should conclude: NATO has peculiar ideas about winning hearts and minds.