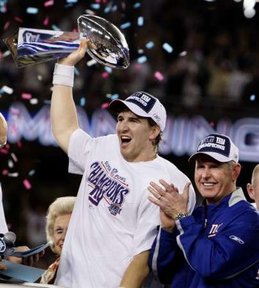 This was a rather bizarre evening.
I went to Chelsea Cinemas on 23rd Street to see the movie “Shame”.
There is no better night to see a movie in New York than Super Bowl evening.
Shortly before the movie started an attendant appeared, he stood before the screen and he gave a short speech. That he was happy that we were there, that we should not forget to silence our cell phones and that he would personally escort us to the emergency exit in cases of emergency.
I waited for the movie to begin, but nothing happened, and after five minutes another attendant appeared who gave more or less the same speech.
After the movie I went to St. Ambroeus to have dinner. Besides the manager and the waiters nobody was there.
“No Super Bowl for you?” one of the waitresses asked.
“No Super Bowl for me,” I answered.
After the Giants won the Italian manager offered me a glass of champagne.
“Give this guy a glass of champagne,” he shouted through the empty restaurant.