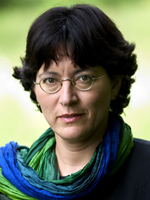 In the early spring of 2008 I went to Israel to do research for an article about the IDF.
One of the people I met was the journalist Amira Hass, whom I admire. It speaks for the newspaper Ha’aretz that they publish her articles.
Today Ha’aretz published this article by Amria Hass:

‘He [Khader Adnan] learned that he was an administrative detainee belatedly, on January 10, and this added a new motivation to his hunger strike: The protest is also against the fact of his detention without trial. Last Wednesday a third "judicial review" session was held at the military court for administrative matters, regarding the administrative arrest order. As in the preceding session, he was wheeled in a wheelchair into the caravan where the sessions are held. Military prosecutor Lt. Tamar Lejlem asked military judge Dalia Kaufmann to "authorize the administrative arrest order for the entirety of the requested period, owing to classified information which I will submit on a unilateral basis to the court. This is a senior member of the Palestinian Islamic Jihad who is involved in organizational activity, and who was imprisoned in the past and has returned to subversive activity."
Five attorneys were on hand to represent Adnan: Jamil Khatib, Tamar Peleg, Mahmoud Halabi, Mahmoud Hassan, Jawad Boulos and Nivin Hassan. This proliferation of attorneys bears witness to concerns about his deteriorating health and the implications.
The process of opposing administrative arrest turns into a guessing game, or a game of tag in which one side is blindfolded while the other side has a full view of events. There is no indictment, nor is there evidence to dispute. Questions posed by defense attorneys have the aim of causing the military court judge to review critically the order to deny an individual's liberty without allowing him or her to stand trial.
Peleg turned to the prosecutor, saying: "I understand, and ask for confirmation, that the questions asked during the interrogation of my client by the Shin Bet express the main suspicions pending against him, suspicions which presumably are reinforced by the classified information."
The prosecutor rejoined: "The secret materials are more expansive than what has been disclosed."
Peleg: "I am talking about the type of suspicions, and not their amount."
The prosecutor: "The suspicions are the same ones featured in the classified materials. There is more expansive information and additional details that are not reflected in the Shin Bet's interrogation. The classified materials relate to a wider range of activities, activities on an organizational level that threaten the security of the region."
The game of ping-pong continued in this fashion. As it concluded, Peleg stated: "The conclusion is that there is no intelligence information that warrants the administrative arrest, and, in particular, that the security officials do not have the option, nor do they have a desire, to put the accused on trial.'

The bureaucratic euphemism of the oppressor always refer to classified materials that cannot be disclosed.

(Who knows what kind of classified materials relate to our activities.)

The paranoia of the state becomes urgent when the state decides that it needs classified materials on all of its citizens.