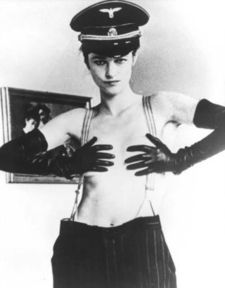 Jodi Rudoren in this weekend’s Herald Tribune: ‘Estee Lieber was in a bit of a tizzy as she emerged from under the blow-dryer for the final walk-through on Thursday evening. “I don’t like it straight,” she complained, wearing a triple strand of pearls and her sash, while waiting to put on her velvety black dress slit up the side. “I’m not modern. In my eyes it’s not beautiful.” This was the first beauty pageant for Ms. Lieber, 74, who was born in Poland in 1937, was 5 when her father was killed by the Nazis in Germany, and 6 when her mother faced the same fate. It was the first time down the runway for all 14 finalists, in what was billed as the first-ever pageant of Holocaust survivors.
They wore sensible shoes, and no swimsuits. Personal stories counted as much as poise.
“I had a long struggle against death, I almost died in the concentration camp,” Mania Herman, 79, told the audience of about 500. “I came to Israel in 1951. I studied, I worked, I made a family. I wrote three books about the Holocaust.” But this pageant was of greater consequence than to serve up a feel-good moment. It tapped into a core conflict that bedevils this society, where most everyone agrees on the need to keep the memory of the Holocaust central and alive, but not everyone agrees on how.
Some criticized the celebration for trivializing a tragedy, a reminder that in Israel the Holocaust is both omnipresent and ever-contentious.’

I don’t believe that organizing a beauty contest for Holocaust survivors is proof of good taste, but this is something between consenting adults.

And compared to Liliana Cavani’s movie “The Night Porter” such a contest is definitely benign.