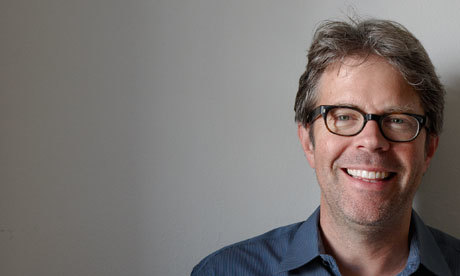 Elaine Blair in The New York Review of Books on Houellebecq and contemporary, male novelists in the US: “While spending several weeks reading and writing about Michel Houellebecq, a loose thought kept rattling around in my mind. In American novels, we have a tacit set of conventions for writing about romantic losers. Houellebecq squarely violates them. This is one reason that The Elementary Particles (2000), his first novel published in the US, seemed (to some) so exciting and revelatory or (to others) completely repellent. We American readers immediately notice that he is covering familiar territory, but in a crucially different way from our own youngish novelists.
Houellebecq, in his first four novels, writes a lot about men who suffer because they are—or perceive themselves to be—unloved by women. Some characters are rejected by women pretty much every time they venture into a bar. Others are rejected only once or twice, but with catastrophic psychic consequences. Some hardly even bother trying to meet women, so paralyzing is their fear of the kind of intimate scrutiny that most of us take for granted as part of “dating.” The man who feels himself unloved and unlovable—this is a character that we know well from the latest generation or two of American novels. His trials are often played for sympathetic laughs. His loserdom is total: it extends to his stunted career, his squalid living quarters, his deep unease in the world.”

“Houellebecq’s mode is to shock and provoke, and offending female sensibilities is fair game, but it’s also the least of his ambitions. He is willing—indeed, eager—to be unlikable in order to get under our skin, and therefore make his social criticisms more forcefully than a likable narrator can.
The younger American novelists, they want to be liked. And their novels are, in fact, irresistible, among the best novels around, in my opinion—ingeniously funny, buoyant, true. The authors have exquisite control over point of view and tone. Their narrative voices are sexy. Which makes you realize that an entire realm of erotic experience goes unrepresented in most of these novels: the authors so scrupulously deflate any sexual confidence or self-regard on the part of their characters that they avoid dramatizing the fact that men, in the real world, can actually channel their libidinal energies into seductive power.”

(Read the complete article here. Very much worth reading.)

So on the one hand the narrative voices of contemporary American novelists are sexy but on the other hand their male protagonists lack seductive power.
I haven’t read enough contemporary American fiction to judge whether this statement is true or not, but I did read my Houellebecq and what Elaine Blair forgets to mention, at least in this article, is that sex, or the lack of it, in Houellebecq’s universe is always political.

According to Elaine Blair, younger American novelists want to be liked. I would say they want to sell books, and their desire for appreciation can be found among novelists in other countries as well.

Houellebecq’s persona, which is sometimes undistinguishable from the main characters in his novels, is indeed truly unlikable. That’s why he never became a commercial success in the US. Deep down the French know that they are disgusting*, whereas in the US dating for example is first and foremost an extension of marketing. The Americans believe in their lovableness. Only people above a certain income can afford to be like Houllebecq. They can say: “I know I’m not likable, but my money is.” Politicians are the exception. No matter how much money a politician has, the moment he runs for office he must be as likable as a novelist.

*To avoid misunderstandings: they know that human beings are disgusting. I have nothing against the French in particular.