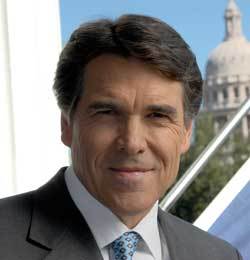 Thomas Powers on Gail Collins’ book “As Texas Goes…: How the Lone Star State Hijacked the American Agenda” in NYRB:

'But Ted Cruz had not yet appeared on the horizon when Gail Collins was writing As Texas Goes… She was after bigger quarry, Rick Perry, who had been warming up for a run at the White House over the previous several years. Last August, he held a giant prayer meeting in Houston on the eve of declaring his candidacy. The atmosphere of the seven-hour prayer session was not quite that of an old-time tent revival meeting, but close.
“Father, our heart breaks for America,” Perry prayed with eyes closed and hands clasped in front of a crowd of thirty thousand. “We see discord at home. We see fear in the marketplace. We see anger in the halls of government and, as a nation, we have forgotten who made us, who protects us, who blesses us, and for that, we cry out for your forgiveness….
“You call us to repent, Lord, and this day is our response.” One longed for the late Molly Ivins. “The next time I tell you someone from Texas should not be President of the United States,” she said after the second George Bush mounted the national stage, “please pay attention.” Rick Perry was designed by the God who made him for a royal skewering by Molly Ivins, but God was merciful, and spared him that.
Yet Gail Collins in her thorough and serious way has pretty well taken Perry apart. Her book would have been at the right hand of every Democratic strategist trying to fend off a national Perry campaign, if he were still in the race. For ten minutes last August it seemed he might go the distance. His formal announcement came a few days after the day of prayer, and he soared briefly in the polls. Then things started to go wrong. Collins remarks that Perry “went on to become one of the worst candidates for president in all of American history.” He performed poorly in early debates, did worse in later ones, won no friends when he denounced homosexuality as “deeply objectionable,” worried even Christian backers when he attacked Obama’s “war on religion,” alarmed just about everybody when he said on stage while the other candidates listened in various postures of amazement that he would eliminate three cabinet-level departments when he got to the White House, but could remember the names of only two of them. It did not help a few minutes later when the name came to him—the Department of Energy! Next day a British newspaper said Perry’s campaign was in “meltdown” following “one of the most humiliating debate performances in recent US political history.'

(Read the complete article here -- if you are a subscriber that is.)

One could argue that at least Mr. Perry was being honest. Perhaps more politicians should be willing to admit that all they can offer is a prayer.

I would vote for a politician who would declare: “Don’t expect much more from me than a prayer a day and some gospel music.”