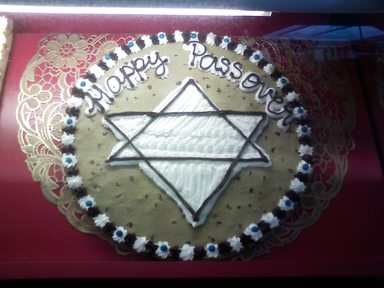 Although I cannot be considered an observant Jew I was pleasantly surprised this afternoon when my favorite restaurant for lunch, Nicole Farhi, served not only bread but also matzos.
I ate my first matzo this Passover and I do think it’s better for most people involved that my mother and sister have no knowledge of this site.
It is very well possible that my outburst of sentimentality was connected to the fact that earlier this morning I threw up four times. (When I throw up it's always more than once; the same can be said about my sneezing.)
I’m suspicious that the mahi-mahi in mussel reduction, served to me the night before at Sant Ambroeus was not as fresh as it ought to be.
Furthermore it has to be mentioned that my godson discovered today the joy of egg painting in the Dutch city of Hilversum.
His mother reported that only three children showed up for the egg painting and decorating course at the children’s bookstore that had organized the event for free.
Forgive me but on a day like this such a thing can make me cry.
I think of the ladies who own the bookstore, I think of the eggs they bought the day before, I think of the woman who was hired to instruct the children.
No irony is involved here. I do cry from time to time but never in public.