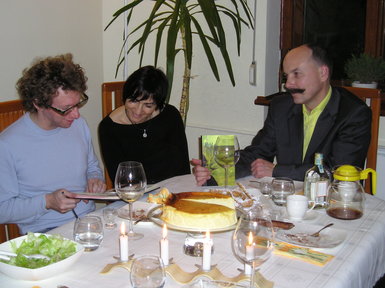 Back in February I had a lovely dinner at the in Wroclaw. Jerzy Koch is professor at the University of Wroclaw and he is into cheesecake. Which is very good because I’m into cheesecake as well.
This week the Dutch rightwing magazine Elsevier published a small article about my play “Our Pope”. (An article infested with factual errors, but we are speaking here about journalism in the Netherlands so we know what to expect.) In this article Mr. Koch is introduced as “my companion” while I was in Wroclaw.
I assume that Mr. Koch has secret fantasies about being my friend or the journalist is quite unprofessional even by Dutch standards.
In this article Mr. Koch is suggesting that it’s a little bit too easy to say something about religion in Poland, I should go to Iran or Egypt and say something about religion over there.
I would love to write the play “Our Ayatollah” – really I would love to do that. Send me an invitation and I pack my suitcase.
But what’s slightly ironic here is Mr. Koch accusing me of cowardice.
My explanation is that the bouquet of flowers I bought for Mr. Koch’s wife was not big enough. Or maybe too big. You never know in Poland.
After all this is a country where a director of a theatre, Krystyna Meissner, claims to have read a play, while in reality she is relying on the opinions of a cheesecake lover. (The distinction between a lie and religion is in Poland not always clear, unfortunately the same can be said about many other countries.)
Which doesn’t mean that I believe that Mr. Koch is not a sophisticated and intelligent person, with a beautiful moustache.
I respect his opinions and I respect his fears.
The fears of the small bourgeoisie in a provincial town in Poland -- these fears are very charming, unfortunately not always very discrete.